Darjeeling town (population 83,000 and elevation 2,134 m) is located on a spur with houses hugging the hillside. The place to visit are Chowrasta, a wide promenade atop a ridge lined with shops and restaurants; Mall Road, starting and finishing at Chowrasta, for a leisurely stroll amidst peaceful surroundings and splendid views; Padmaja Naidu Himalayan Zoological Park which has the Siberian tiger, Himalayan black bear, red panda, snow leopard and many other animal and bird species, and the nearby snow leopard breeding center and the Himalayan Mountaineering Institute, a training center for mountaineers which also houses the Everest museum; Natural History Museum, with its fine display of Himalayan wildlife; Observatory Hill which has Hindu and Buddhist shrines; Dhirdham, a pagoda style Hindu temple; Tibetan Refugee Self-Help Center, a major center for the production of Tibetan carpets, woodwork and leather goods; the Buddhist monasteries of Bhutia Busty, Thupten Sangag Choling (Dali) and Yiga - Choling (Ghoom); Batasia Loop, a marvelous feat of railway engineering; Tiger Hill for its renowned sunrise view over Kanchenjunga and the eastern Himalayas; Japanese Peace Pagoda, established by the Japanese order, Nipponzan Myohoji; and Lloyd's Botanical Garden which has a varied collection of Himalayan flora.

A paradise of natural beauty, land of monumental mountains that seems to touch the heavens. Sikkim lies-sandwiched with Nepal in the west and Bhutan in the East. The edge of the Tibetan Plateau more or less demarcates the northern border with Tibet. This small but beautiful land is towered by Mount Kanchendzunga, the third highest mountain in the world, "Houses of the five treasures".

Sikkim Himalayas is laden with a canopy of exciting, mysterious peaks like the Mt. Kabru, Mt. Narsing, Mt. Pandim, Mt. Sinoulchu, Mt. Rathong, Mt. Simvo, Mt. Jophuno, Mt. Talung and Mt. Kanglakhang which are above 6100m/20,000ft. The imposing peaks slightly below 20,000 ft also form an integral part of the eastern Himalayas which are Mt. Masthonangye, Mt. Yabukjackchen and Mt. Lamaongden. The Sikkim Himalayas are littered with sacred Lakes like the Lake Gurudongmar, Lake Cholamu, Lake Tschangu(Tsomgo) and others which are a treat to the onlookers. There are many glaciers in the Sikkim Himalayas the most important are the Zemu glacier, Rathong glacier and the Lonak glacier.

Religion forms an integral part of the daily lives of the Sikkimese.

Kalimpong (Nepali: कालेबुङ kālēbuṅg; Bengali: কালিম্পং kālimpôṅg; Tibetan: ཀ་སྦུག) is a hill station in the Indian state of West Bengal. It is located at an average elevation of 1,250 metres (4,101 ft).The town is the headquarters of the Kalimpong subdivision, a part of the district of Darjeeling. The Indian Army's 27 Mountain Division is located on the outskirts of the town

Kalimpong is known for its educational institutions, many of which were established during the British colonial period.It used to be a gateway in the trade between Tibet and India before China's annexation of Tibet and the Sino-Indian War. Kalimpong and neighbouring Darjeeling were major centres calling for a separate Gorkhaland state in the 1980s, and more recently in 2010.

The municipality sits on a ridge overlooking the Teesta River and is a tourist destination owing to its temperate climate, magnificent Himalayan beauty and proximity to popular tourist locations in the region. Horticulture is important to Kalimpong: It has a flower market notable for its wide array of orchids; nurseries, which export Himalayan grown flower bulbs, tubers and rhizomes, contribute to the economy of Kalimpong.

SOME OF THE PLACES OF INTEREST IN DARJEELING 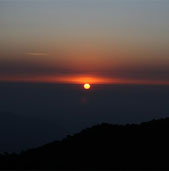 Ghoom is a regular stop on the return journey from the Tiger Hill look-out point, where views of Kanchenjunga, the eastern Himalayas, and even Mt. Everest make it worth getting up well before sunrise. 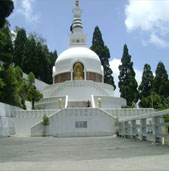 On the way back from Tiger Hill, you can also ask your driver to stop at the serene Japanese Peace Pagoda for a lovely view of both the town and the mountains. It is nestled around a peace loving atmosphere. 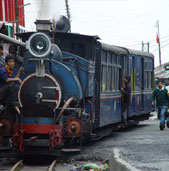 Darjeeling's ubiquitous Toy Train with narrow guage steam engines brought in all the way from England and Scotland was the first form of mechanized transportation to be introduced back in the 19th. Century by the British. 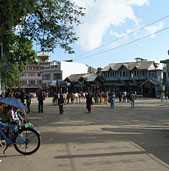 The pride of Darj, as it's affectionately called, is its main promenade, the Mall that encompasses the main square, the lively Chowrasta with its central statue of Bhanu Bhakta, and loops around Observatory Hill. 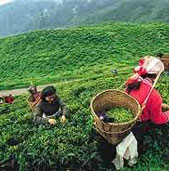 Here the tea from the gardens is processed. One can spent a few hours here. Entry is only allowed to persons who have permission from any officer of the estate. 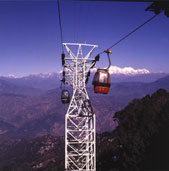 The Darjeeling - Rangeet Valley Passenger Rope way is situated at North Point which is 3 km from the town . This is the first passenger Ropeway to be constructed in India. It is 5 km long and connects Darjeeling and Singla Bazaar. 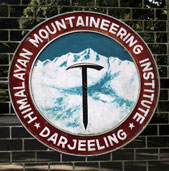 wo minutes past the zoo (enter via zoo gates) is the Himalayan Mountaineering Institute, a training center with some public exhibits—photographs, autographs, equipment of famous mountaineers, costumes of hill folk. 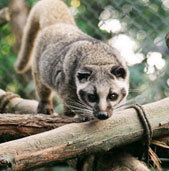 The clean, neatly laid-out and peaceful Padmaja Naidu Zoo is justly famous for its rare snow leopards, gorgeous clouded leopards, Siberian tigers, Tibetan wolves, Himalayan bears, shy red pandas, and other alpine animals that are not easy to see in other zoos..

SOME OF THE PLACES OF INTEREST IN SIKKIM 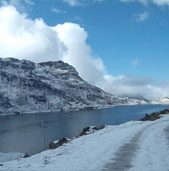 Tsomgo lake is only 40 kms. from Gangtok town and is situated at an altitude of 12,210 ft. The drive from Gangtok takes about 2½ hours by bus. The lake is bout 1 km. long and oval in shape, 50ft. deep and is regarded extremely Holy. 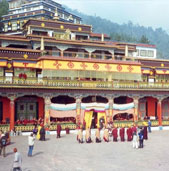 The seat of the 17th Gyalwa Karma, late His Holiness Rangjung Rigpae Dorjee, it is believed that the monastery, built in 1960 is a replica of the original Kagyurpa Monastery in Tsurphu, Tibet. ( 24 kms from Gangtok). 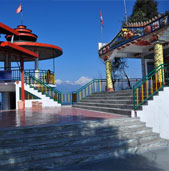 It is approximately 5½ km. from Gangtok town. A temple of God Hanuman, worshipped by the Hindus. Besides offering prayers, one can enjoy the scenic beauty of Gangtok town and have a satisfying glimpse of Mt Kanchendzonga, which is snow clad. 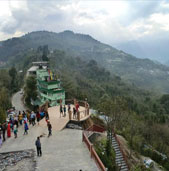 Built by the late King of Sikkim Sri. Tashi Namgyal, it is situated 4 km from Gangtok town from where one can have a clear view of opposite hills, besides Mt. Kanchandzonga.Offers a breathtaking panorama of the majestic Mt.Kanchandzonga. 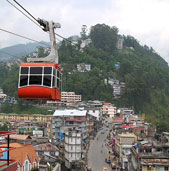 Ropeway which situated in Gangtok gives a breath taking view of whole of Gangtok surroundings and the main town.It is a ride that one must experience. 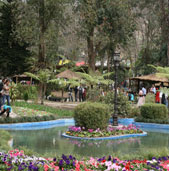 About 14 kms from Gangtok is the Saramsa Garden, the home of Sikkim's most exotic orchids and other rare tropical and temperate plants. Established and maintained by the Department of Forest, it is an excellent recreation and picnic spot. 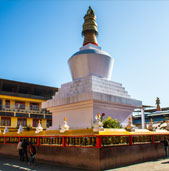 The Do-Drul Chorten or Stupa was built by the venerable Trulshi Rimpoche, head of the Nyingma order of Tibetan Buddhism in 1945. Inside this stupa, there are complete mandala sets of Dorjee Phurba. 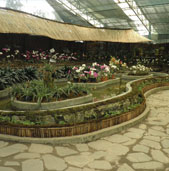 Very close by to Rumtek Monastery, and maintained by the parks and Gardens unit of the Forest Department of the Government of Sikkim, the Garden is an enchanting and soothing experience among the lush green vegetation.